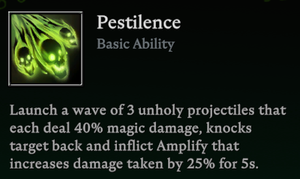 Launch a wave of 3 unholy projectiles that each deal 40% magic damage, knocks target back and inflicts Amplify that increases damage taken by 25% for 5s.

Heart Strike is unlocked via Nicholaus the Fallen.

Pestilence fires three bolts, with one aimed directly on the mouse cursor and one to either side with an approximate 15% offset. These bolts are capable of each striking the same target when fired at point-blank range, which results in the first bolt dealing damage and applying Amplify for the second bolts. This can result in an effectively 140% damage blast in melee range, while also leaving the target vulnerable via the Amplify to a follow-up strike. Unmentioned in the tooltip, Pestilence contains two spell charges. This means your first Pestilence burst can be potentially followed up by a second, which if all three bolts land again would result in a 150% damage burst. 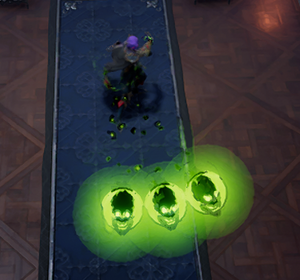